A relatively quiet life out here.  Lots of work shifts for both of us.  Seemed like we took advantage of every weekend we could to see the grandchildren.  We did make it to church in Devils Lake a few times.  There was a picnic after church one Sunday.  Brats and chicken.  Saw some great sunsets thanks to all the wet weather and vast skies.

In our taste hobby of craft beers, we found a couple of places to go.  One is J.L. Beers, a brew and hamburger place. Every one of their stores would have a different selection of craft brew. We tried the Blue Moose over in East Grand Forks, MN. and we really liked Brick and Barley in Downtown Grand Forks.  Down in Fargo we frequented J.L. Beers as well as Vinyl Taco and The Wurst Beer Hall.

After much shopping around, we finally traded in our 25' pull behind trailer for a 34' fifth wheel. Some great people at Leisureland RV in East Grand Forks, MN.

Of course we did some geocaching as well. In addition to some cute finds in Sertoma Park next to the hospital, Laurie and I both placed our first caches.  Mine is in Grand Forks and hers is at the entrance to our town of Petersburg. 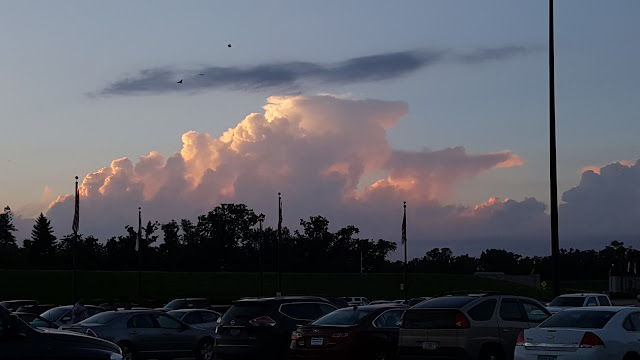 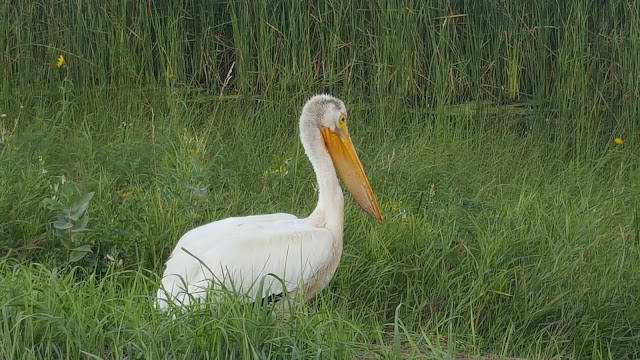 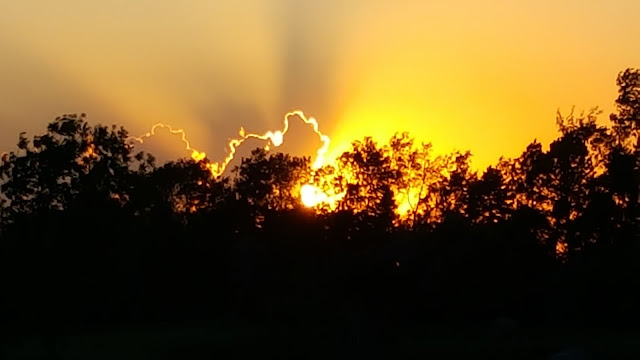 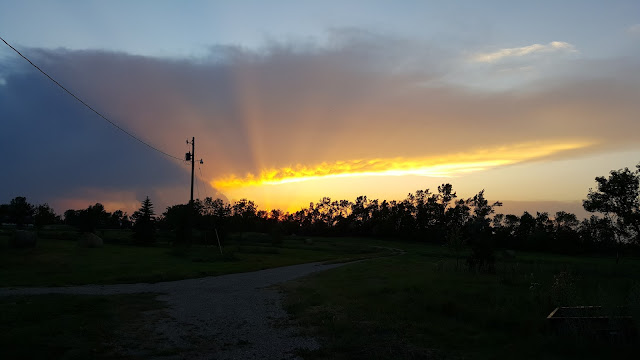 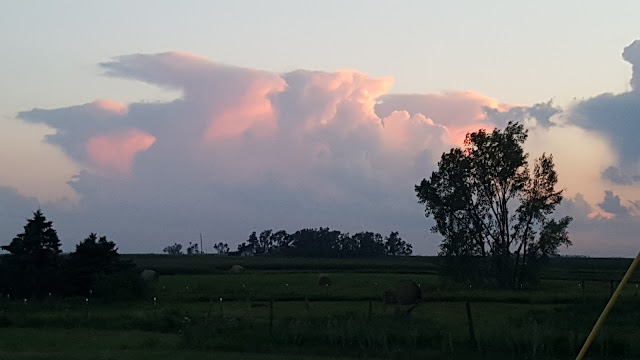 We had the Jeremiah and Kalliope

for a few hours in Grand Forks and took them to University Park near UND. There is an area with sprinklers and sprayers for the kids along with the usual park playground devices. We needed some things that day, so we took them with us to Walmart first.  We got them to the park and turned them loose.  They had fun for a while, then we changed them into dry clothes. After that we had a snack and then let them play on the swings and slides.  Good day with the kids. 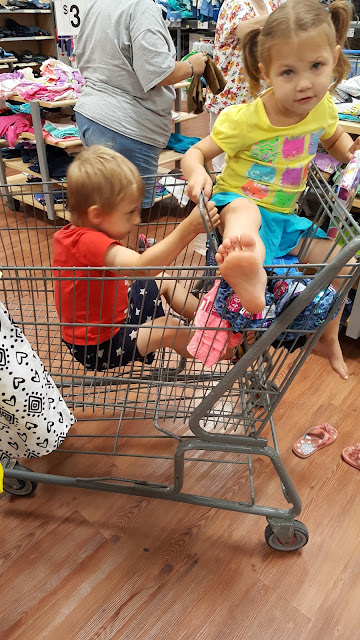 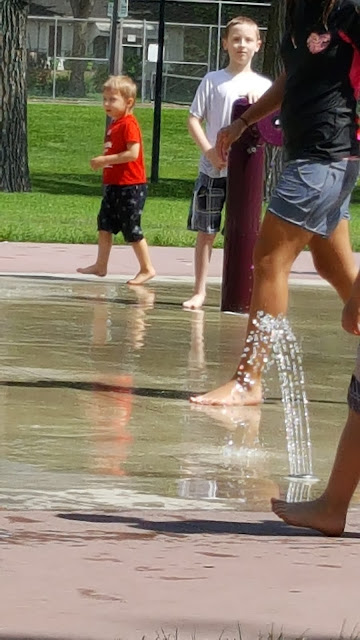 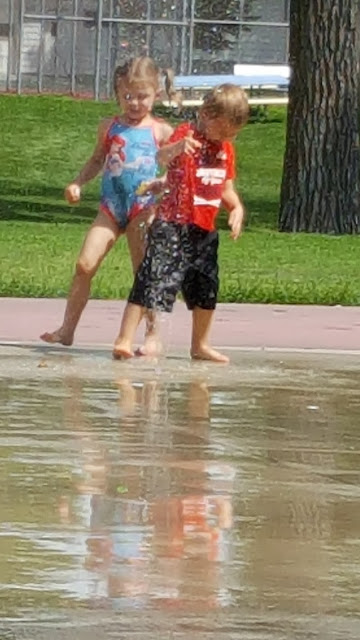 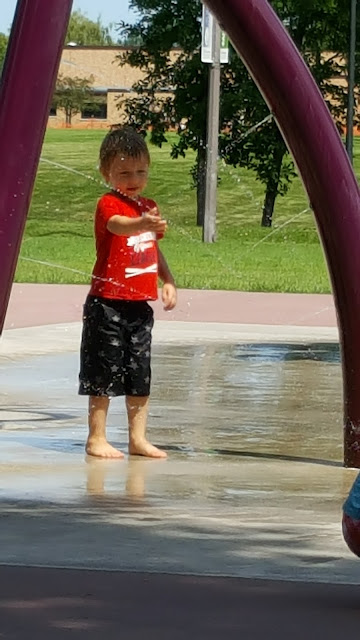 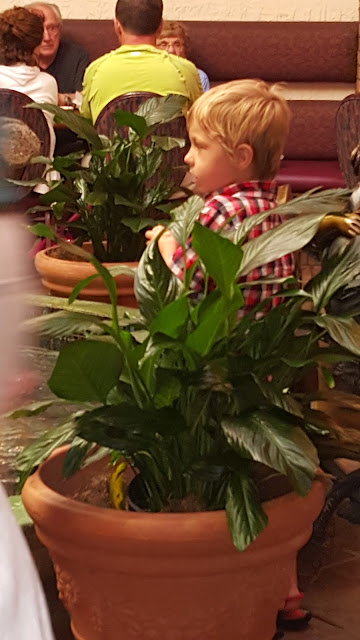 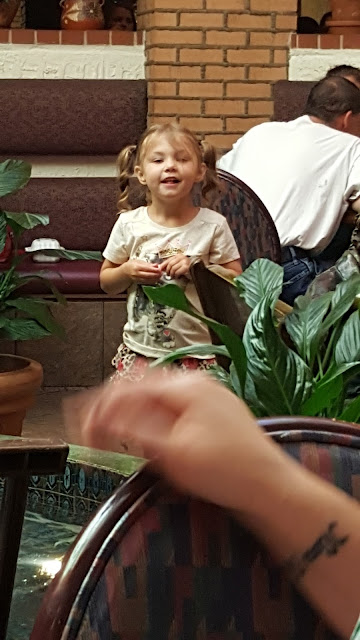 On the third of July, we had Eliza, Brett and the kids out.  We had fireworks, we bought fireworks, and so did they.  As is usual, any event of fun is always better when you have little ones around.

So then came the Fourth of July.  As usual, we were able to honor our son by riding for Gold Star parents in the Devils Lake parade.  Jamie and Jen Eback graciously provided their truck for the event.  Jen's kids painted posters for the truck honoring Jeremiah which was very touching.  Big thanks to them.  We sat in the bed on chairs along with her kids which is always fun, but we added our grandson Jeremiah and Brett Messerschmidt's daughter, Evie.  That was a blast.

After the parade, we had been invited to go out to Devils Lake out to where our friends Eric and Chris Jorgenson have property next to our other friends, Reg and Eileen Herman.  We also had Russ and Helen Petty and parts of their family, a well as Brian and Shaun Prince.  The food spread was amazing and the weather looked great.   At first.

As the afternoon went on, the weather turned and we were greeted by rain, followed by cold, extreme winds and a tornado warning.  Did I mention hail?  Everybody huddled into the Camper Eric had except Eliza and Brett and the kiddies got into her car.  It got nasty and eventually blew over.  But not before a few trees behind us came down and one bounced off Eliza's and also our cars.

After the storm, which didn't last long, Eric, Russ myself, and a couple of others went out with a chainsaw graciously donated by Reg and George Herman, and cut up and removed the trees that were blocking any of us from leaving later.

The weather cleared and became beautiful.  Many of us went out on the lake and Eric pulled a few around on the tube they had.  It was a lot of fun watching people bouncing on the tube and trying to not get thrown off.

When it was finally getting dark, it was time for fireworks.  We started by sending up memory balloons.  Then Russ and whoever brought fireworks set them off.  It was fun watching the little ones with sparklers.

It always gets dark very late in the summer in North Dakota, so it was around 11:00 when we wrapped it up.  A long, eventful, emotional and enjoyable experience. 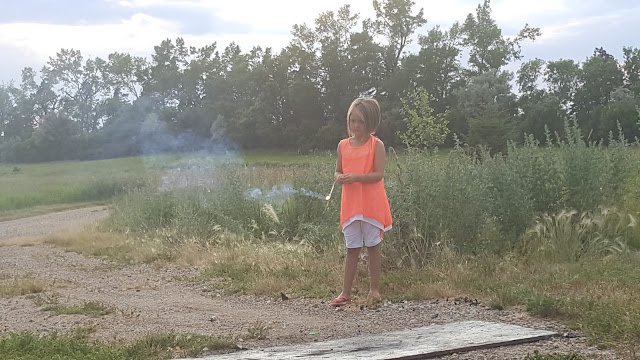 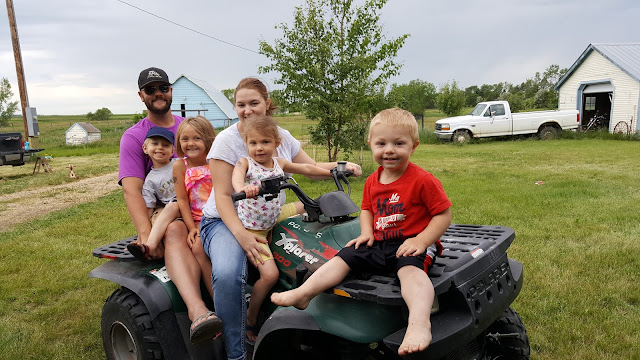 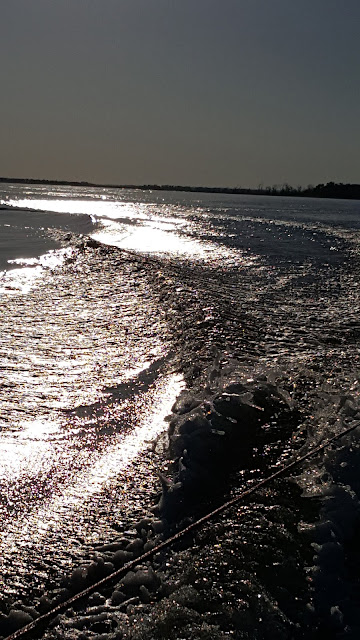 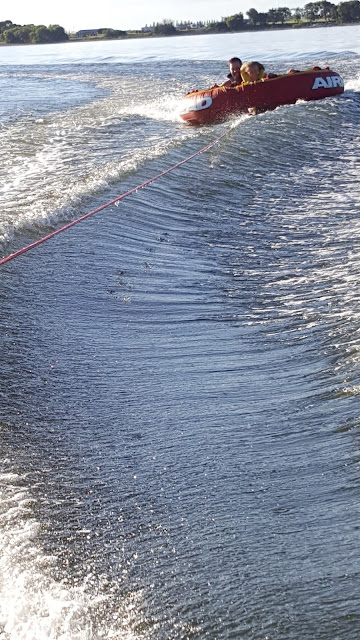 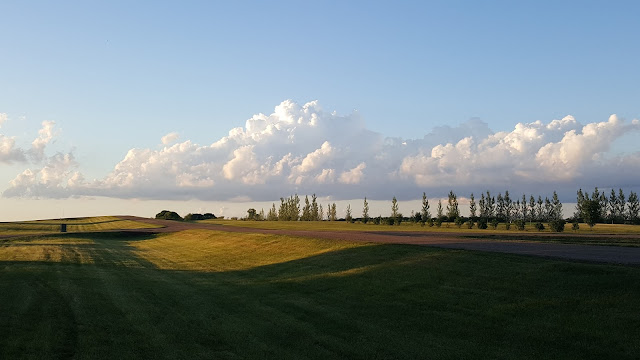 Having finally arrived home to the farm, We settled into starting our summer jobs, opening up the house, getting reacquainted with friends and family and planning for the future.

The weather was very uncooperative that season.  It started to rain almost non-stop but settled down to a once almost daily shower. The weeds in the yard loved it.  Just before we got to our house, there was a wind storm of reportedly 180mph winds.  We lost a bunch of trees and there was some damage to the roof which will need to be fixed.  One of the big Quonset doors was tossed into the field as well.  Luckily, the trees all fell away from the house.  I wasn't able to do much cleanup due to the weather and the chain saw didn't want to work properly until I cleaned it all out.

We had fun overall this summer.  Spent as much time with the kiddos as we could.  Fourth of July in Devils Lake, parade and afternoon at the lake with the Jorgensons, Pettys, and Hermans.  Took turns with having the kids out to the farm.  There was a birthday party for the Irish twins out at Eliza's in Minnesota.

The beautiful thing about open plains and stormy weather, is there are a lot of great sunsets.

Then, it was over and it was time to travel again. 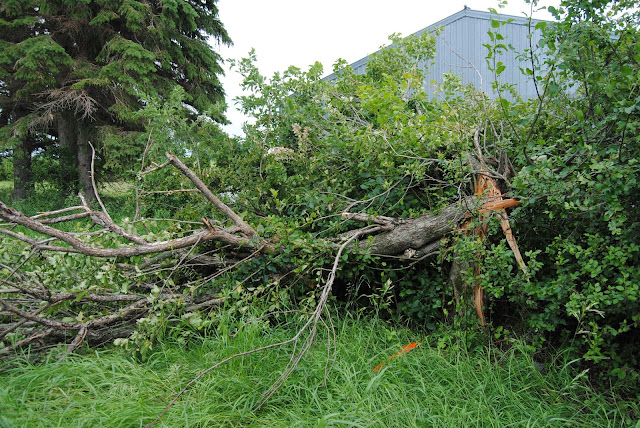 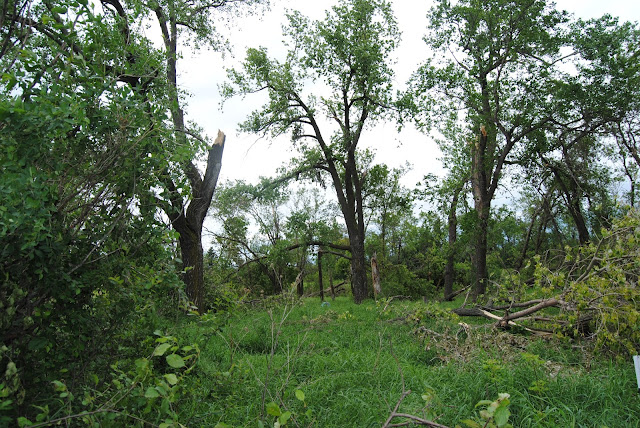 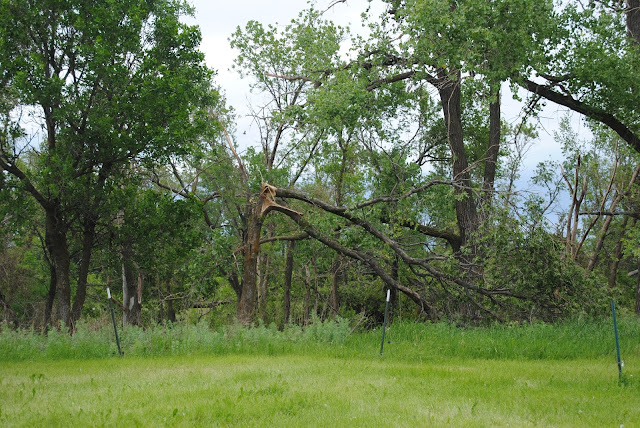 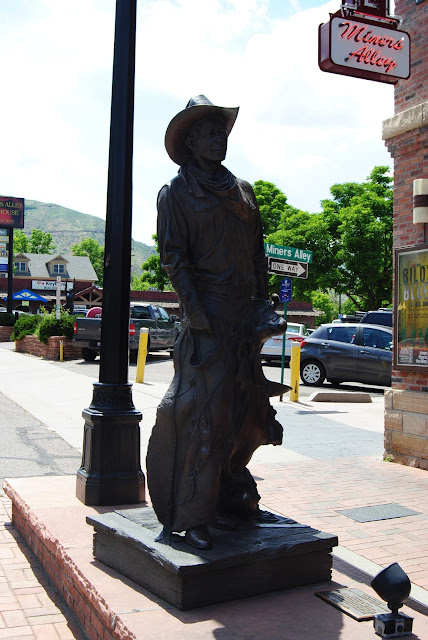 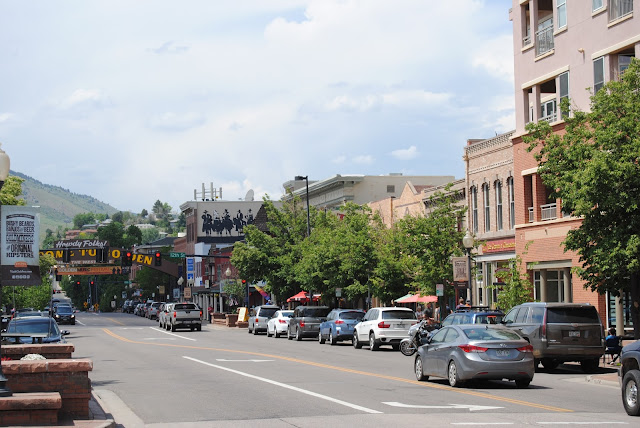 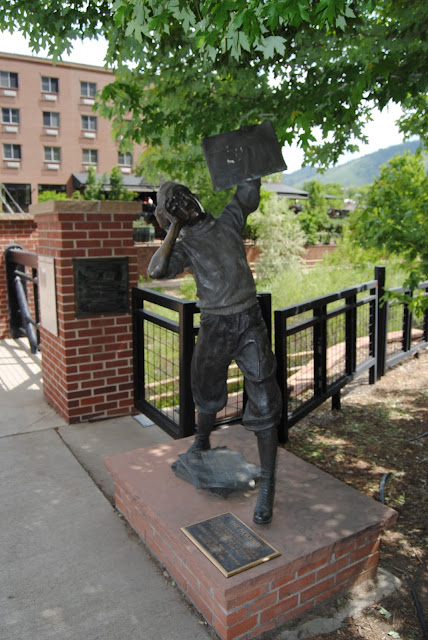 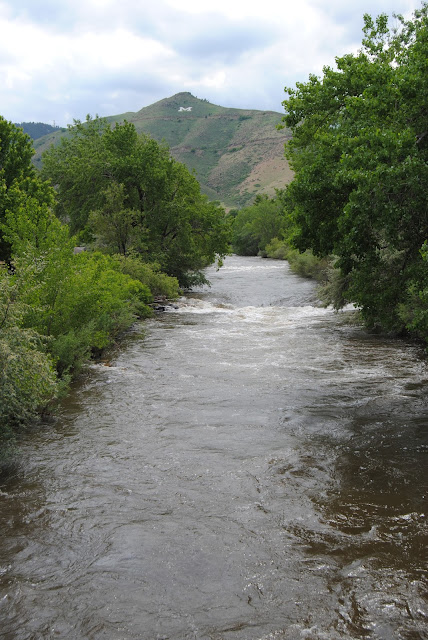 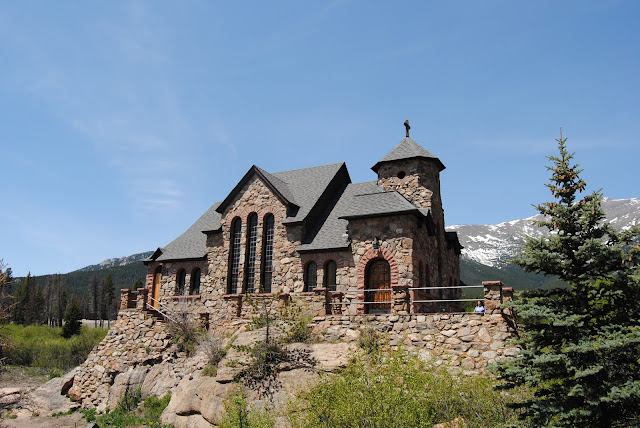 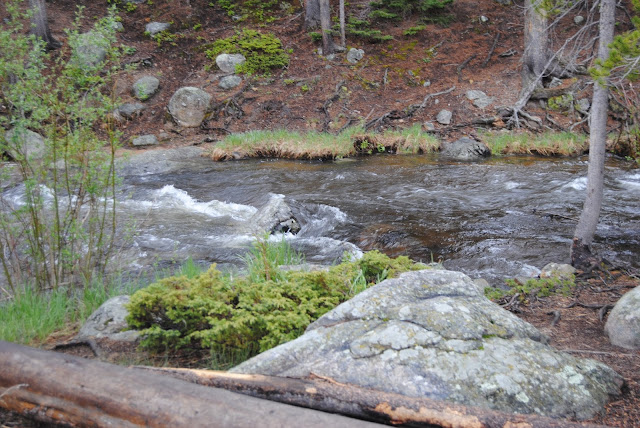 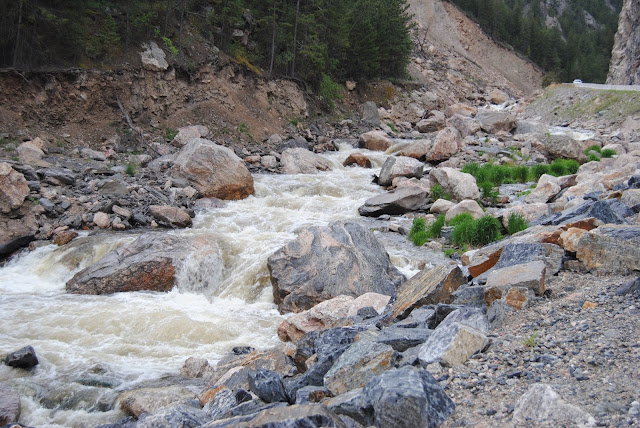