So this is the world in which we have inserted ourselves.  The Chula Vista RV resort is a walled in RV and camper resort on the shore on San Diego bay.

We discovered this place last year when our friends France and Francine stayed here while Francine had a contract at Sharp Hospital.

Next door to us, really a part of the resort is a marina and a resort restaurant and pub.  It feels different here than Santee Lakes.  Between the resort and the bay, is a small park along the shore.  It is well kept and pretty.  On one end, there is a twenty foot ironwork sculpture of a pelican called "Fisherman".  Near the other end of the park is a series of wind vanes that sway and turn to the wind in a delicate dance. Once you get out to the main road, it runs south into Imperial Beach.  North, it only goes a short way, but it connects to the far western end of H Street.  This is a fairly new construction.  To our east, is a large vacant series of lots.  There are some remaining concrete pads.  This used to be where Rohr Aerospace had it's factory before the industry all but left San Diego.  A bicycle path has been put into this area and part of that runs through the vacant area.  We are near the center of the commerce area of Chula Vista.  Just a ways is the Downtown area which has been going through a revitalization.  Or park is only 7 miles from her work.  In terms of our house in North Dakota, that would get you all the way down the gravel roads to the town of Petersburg.

We've taken some walks on the beach, done a little geocaching in the area, and begun to explore some taprooms and local breweries. 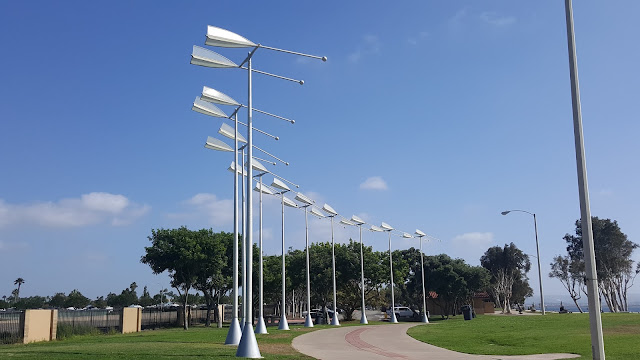 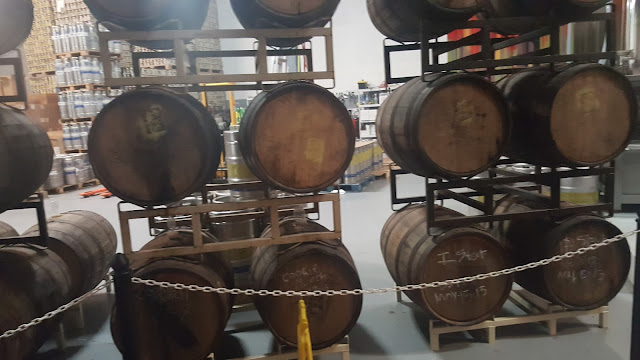 We attended a baseball game in Santee, where two of our nephews played on the same team.  It's fun and a bit long.  always nice to watch the boys complete.  Go team. 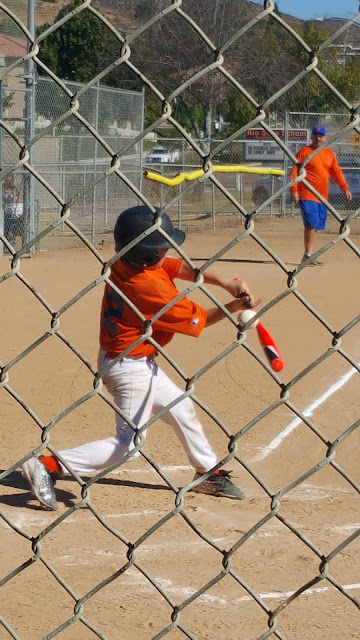 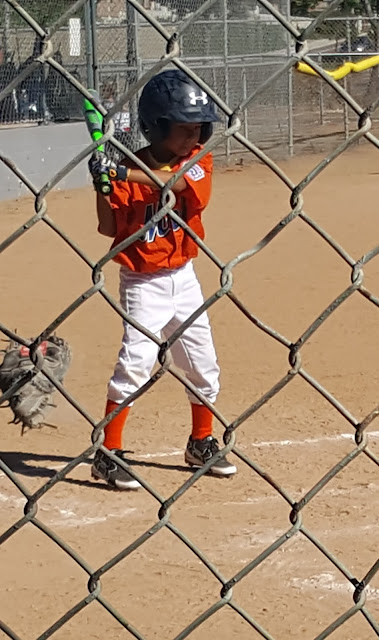 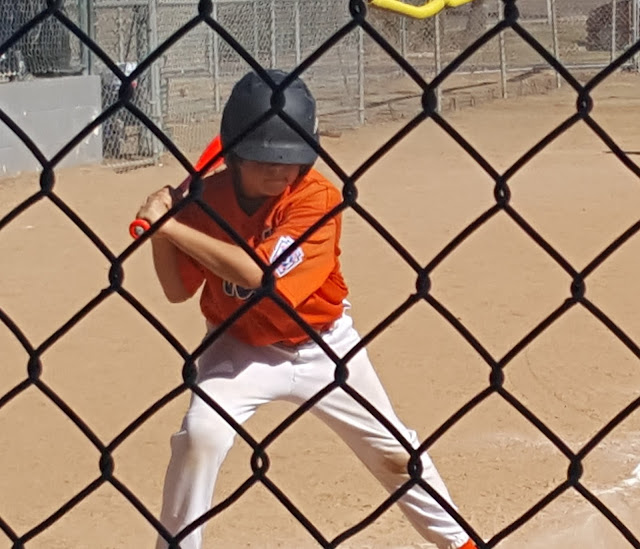 We got into Utah and found a Discount Tire store that had a tire to replace our last blown camper tire that would be open when we got there.  The store was on a main street, but we were going in the wrong direction and there's no way you U-turn a large truck and fifth wheel.  The street just behind the shop had been bought by an auto dealership and closed to through traffic.  We almost made a bad turn when a nice lady came out of her house and told us "Don't go that way". We did make it to the shop and we were told, not only did he have the tire for us, but someone had returned three more after having them for just a day.  He gave us an incredible price on them, ($50.00 each), and included a great price on warranty and all.  The big shock was finding out the tires on the camper were actually eight years old.  No wonder they were blowing out.  We got them installed and cruised on.

Through Utah, the little corner of Arizona called the Virgin River Gorge, and into Nevada.  I had pulled a Travel Bug from a cache in Grand Forks that had, as it's mission, to get returned to Las Vegas. We stopped outside of Vegas near the raceway, and found a great cache.  The cache itself had been horribly damaged, but we had a replacement for it, dropped in the Travel Bug, plus a couple of ours, and went on our way.

Just across the California border is a huge solar power plant, and it is a welcomed sight as it tells you that you've made it to California.  Finally.  Then through the desert, through San Berdoo county, Riverside county, and finally, San Diego county.

We stopped for two days at Santee Lakes campground.  It gave us an opportunity to see family there.  We got to our campground in Chula Vista the next day and got it all parked and hooked up. Then, a huge exhale of breath as we had now landed. safe and sound.

The trip from Bismarck through Montana and into Idaho, thanks to a bad tire took us two days.  After getting a replacement tire in Butte and having a great Montana steak dinner, we stayed the night and hit it early.  It was nice to get out of Montana without further incident.  We were cruising down the road with few worries, when the truck just stopped working.  A positive note was the tow driver had an attachment for his rig that allowed him to both load our truck and pull our camper.  We got to an AAA approved shop and they luckily had a place where we could put the camper and stay in it, complete with water and at least 110V power.

The truck had a major problem and was going to be costly and take time.  Time we had.  We were planning on making a stop in Utah at Zion National Park, so by deleting that from our plans, we had time. The wonderful people at the shop provided us with a couple of rides and even a loaner car once.

We explored the little town of Idaho Falls.  Originally called Eagle Rock, there is a basically man constructed river fall system that provides power for the town.  The downtown area has a lot of personality and is going through a revitalization project.  This part of the trip was a drag for the costs, but once again, we got to explore something we would usually drive by and had our trip enhanced.

So, after a few days, we got onto the road again. 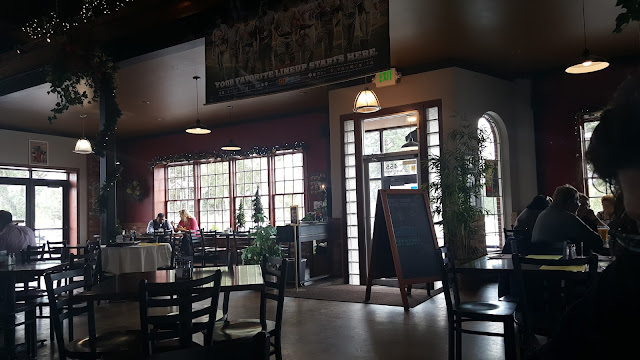 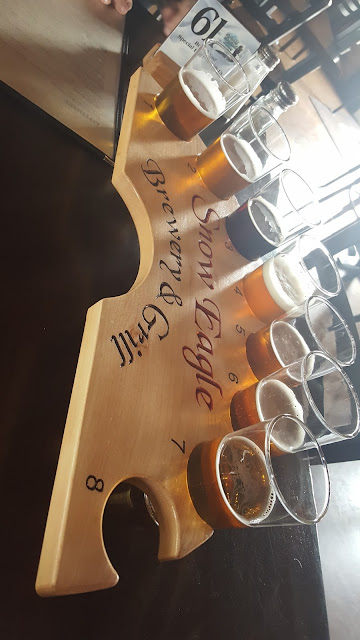 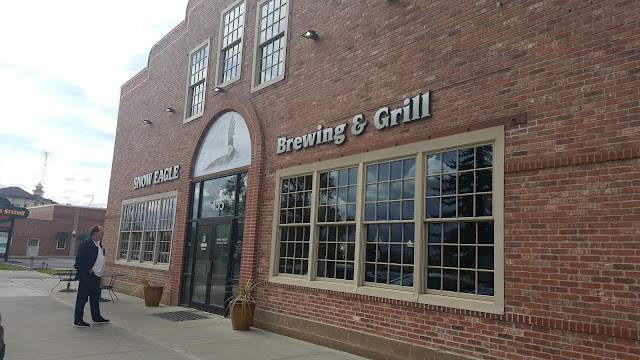 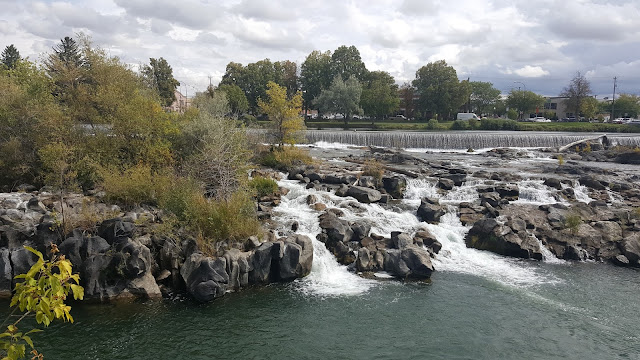 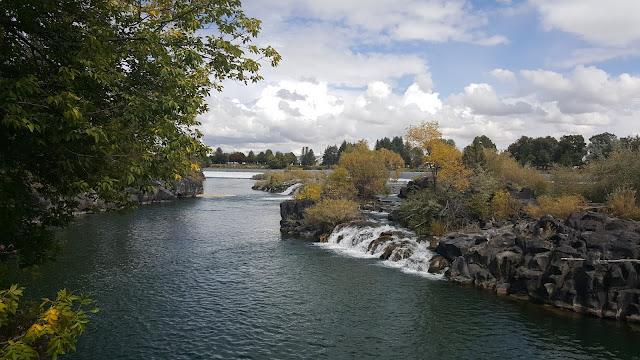 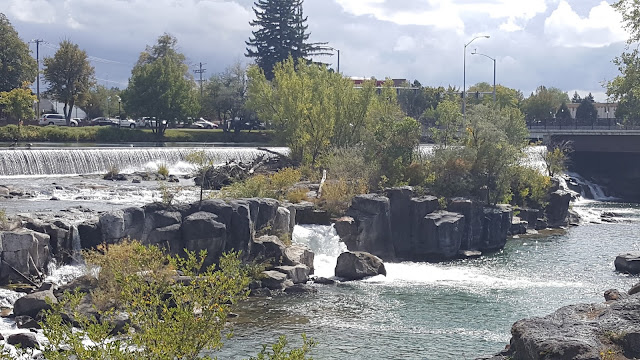 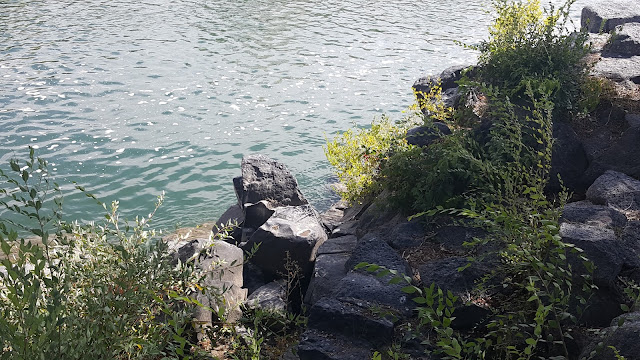 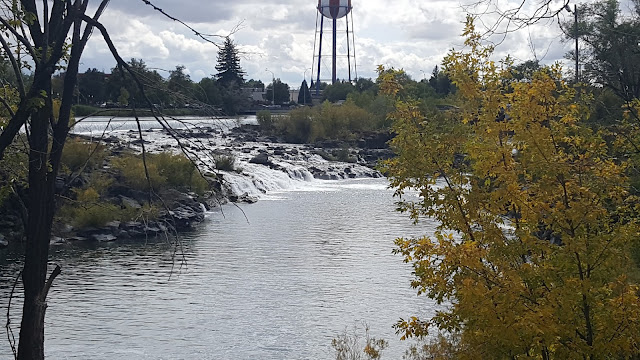 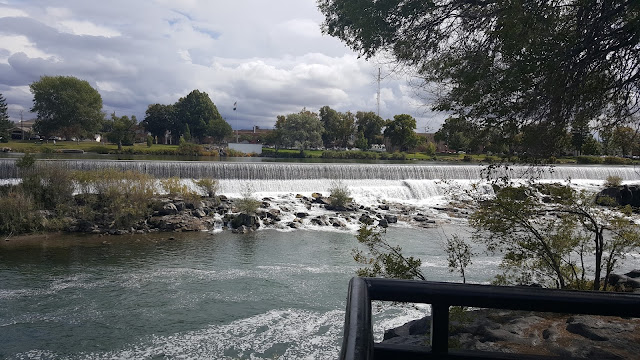 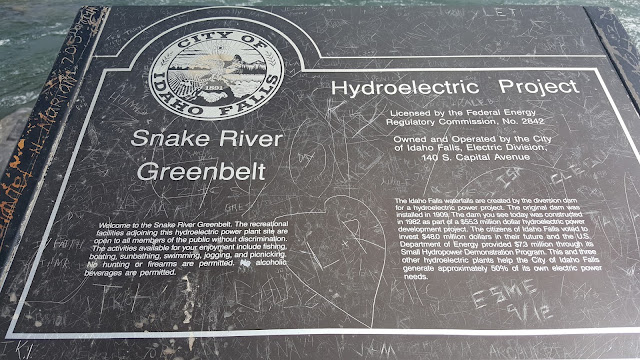 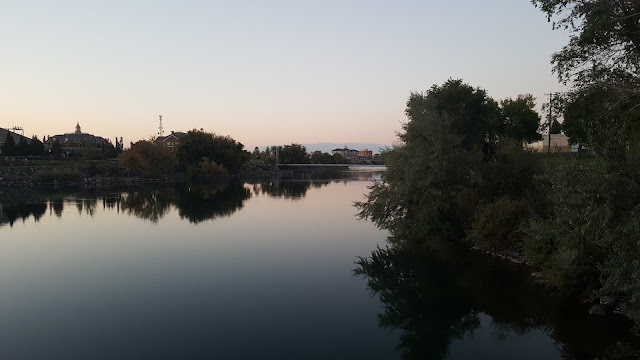 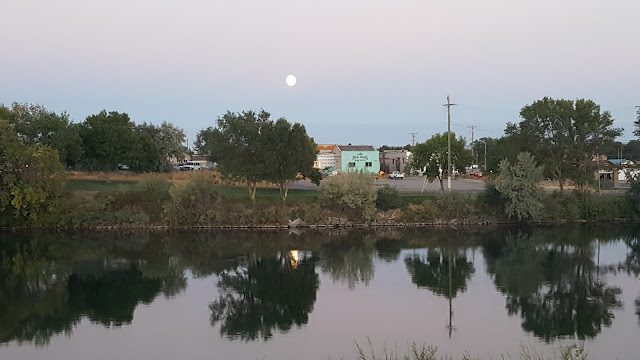 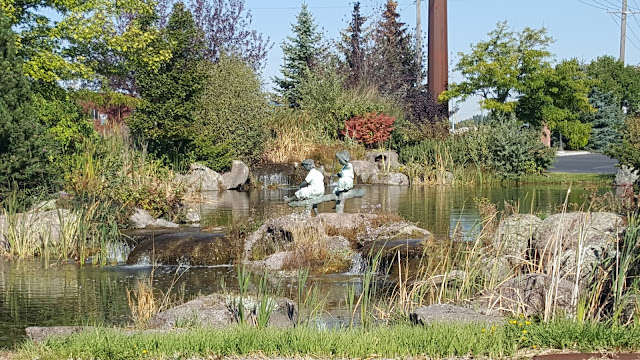 On the evening of the 1th, having checked out of the hotel and said goodbyes, we finally headed out towards California.  We made a brief stop at Teddy Roosevelt National Park.  Drove up a road, looked at the groundhogs and took a couple of pictures.  After that, we were on our way and quickly cruised into Montana.  We made it just past Whitehall, when Laurie noticed a huge bubble in one of the fifth wheel's tires.  We pulled over and the tire eventually went.  After some scrambling around to find a thin-wall socket, we finally got the tire changed and made it to Butte where we bought another tire.  On the way out of Whitehall, we detoured unintentionally, and drove through some pretty mountain areas until we made it back to the highway.  We pulled over in Butte for the night and headed out towards Idaho in the morning.  We stopped for a quick PNG (park and grab) geocache at the continental divide rest stop. 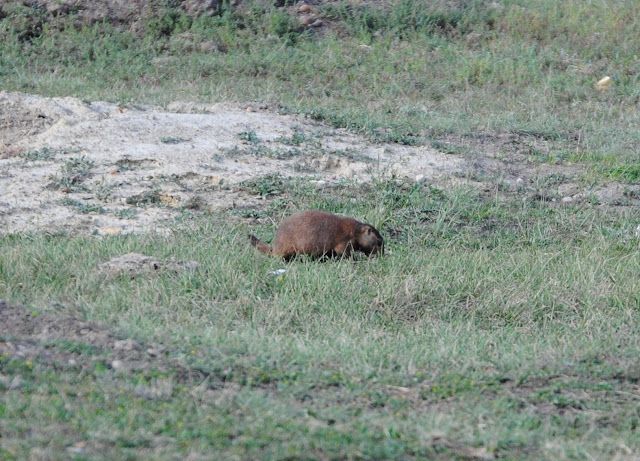 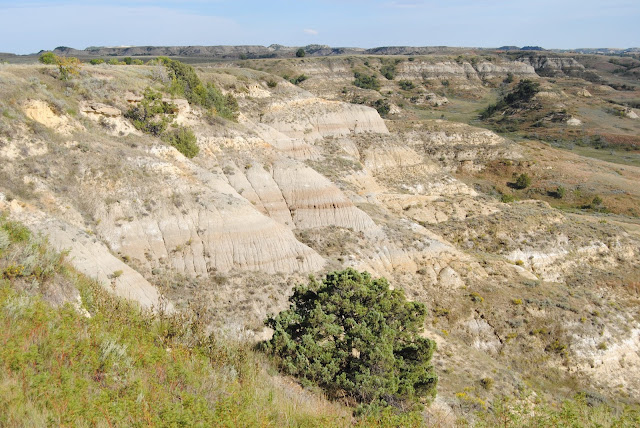 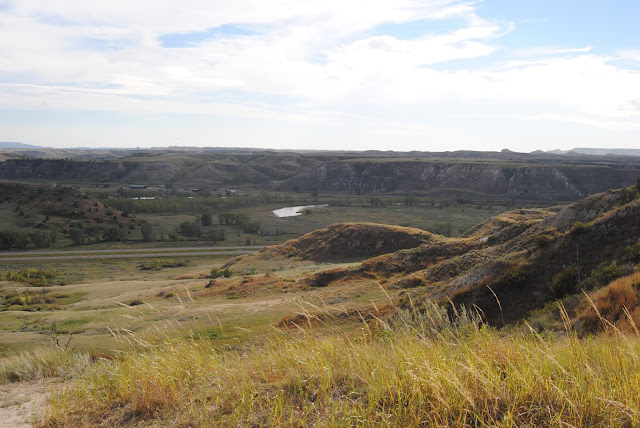 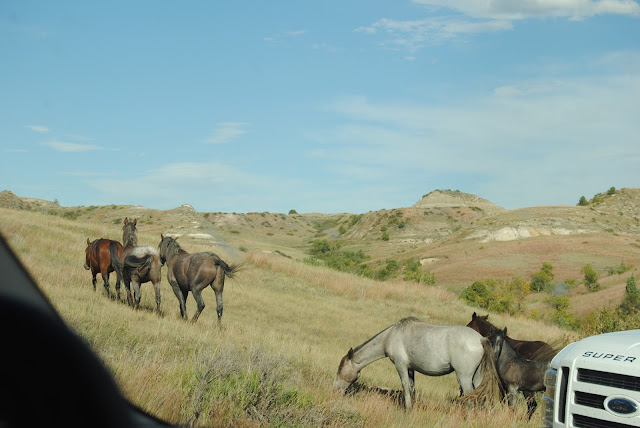 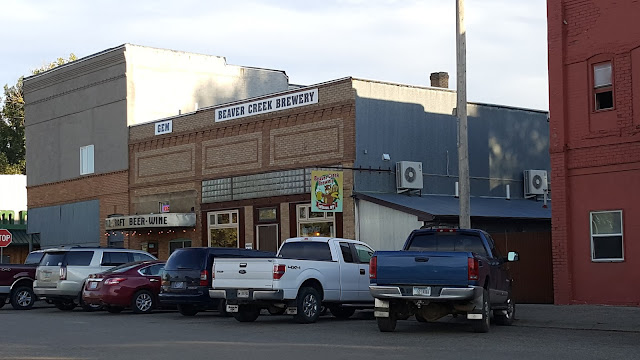 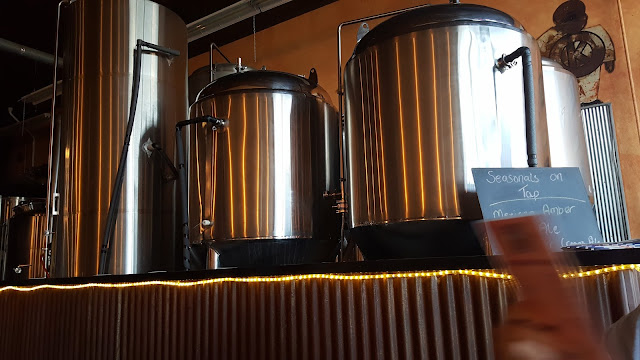 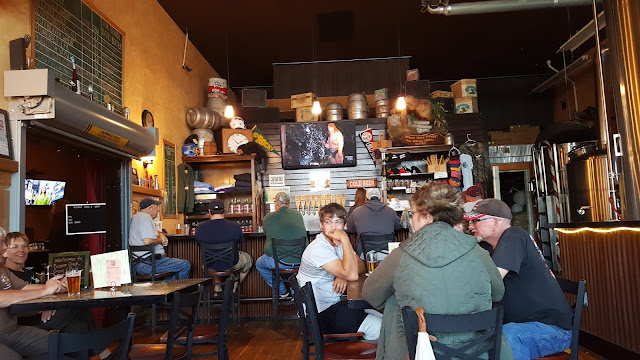 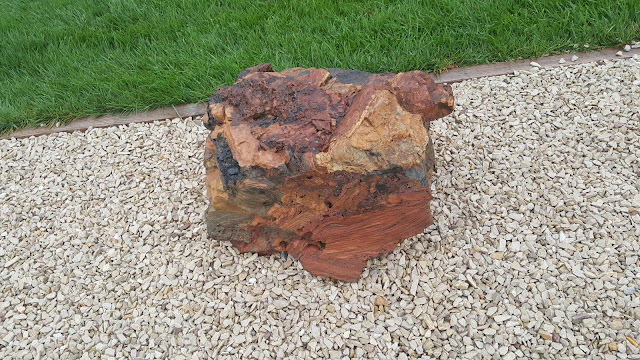 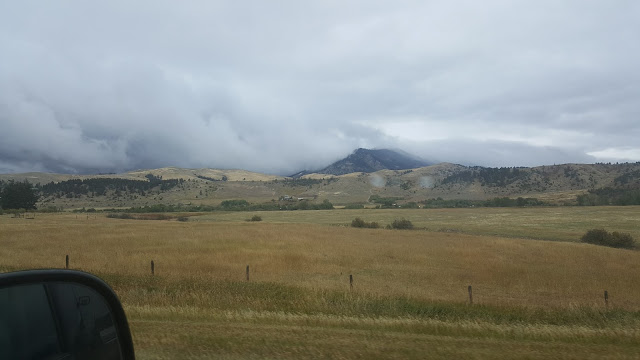 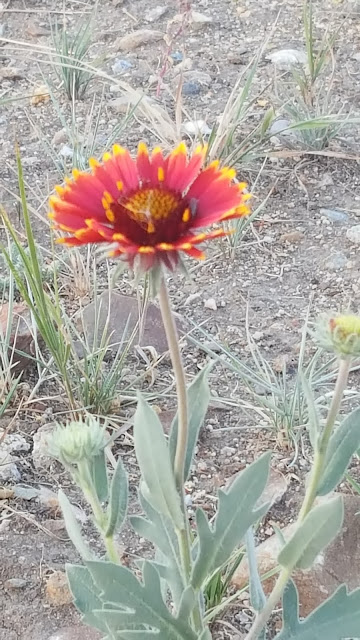 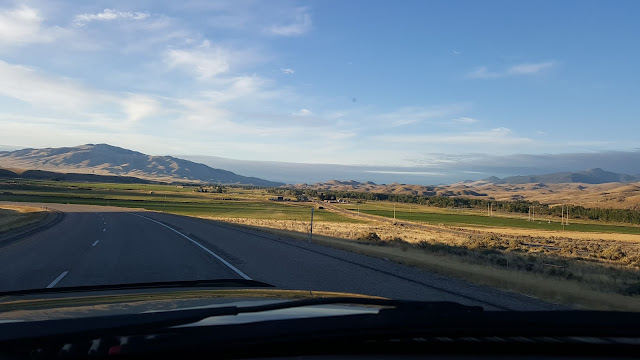 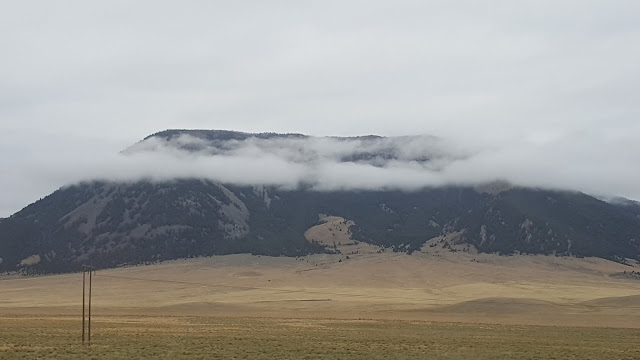